Some would say I’m super detail oriented. Others would say I’m not detailed enough. Depends on whether I’m hanging with my artist peeps or my nerd peeps.

I’m a combination of both.

I don’t care too much what y’all think. I’ll just keep trying to use my powers for good not evil.

Over the last couple of weeks I inadvertently ended up with more details on my plate than I was really happy about. Much of it was food prep related, so I just pushed through. I am the hostess with the mostest, but I get cranky when I’m overtired. Between heat and humidity, busy grocery stores, weird technology gremlins, and ragweed with a vengeance …

Yeah, I want to whine a little about it. 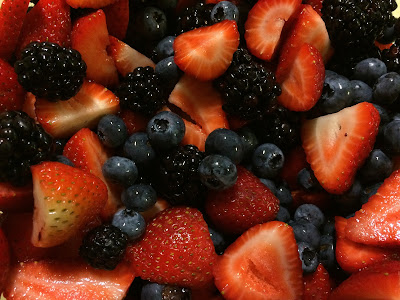 On a routine basis, just give me a few veggies, EVOO, a skillet, and get out of my way. Oh, and a good knife. But then sometimes multiple occasions crop up all at once. All good occasions. But yeah.

On Sunday, from stage lights to ninety plus degree outdoor family potluck … I couldn’t remember a time before I was sweating profusely. Dehydration was probably imminent. As tempting as the thought of air conditioning and a nap were …

“You know, if we leave now, we could put food away, grab our bathing suits, and jump in the pool.”

The pool was almost not cold enough. When it started raining, no one made any effort to move.

I am getting a chance to catch up on sleep and self-care in general this week. Aaahhh.

Whilst working the Sudoku from the Sunday paper, I noted in the Hobby Lobby ad that art supplies were on sale this week. Namely oil paint (the brand I had been scoping out already), easels, and canvases. Sweet. I’ve had a project in mind for a while. I was totally waiting for a sale, as opposed to making multiple trips with the “40% off one regular item” coupon.

You didn’t know I paint? Don’t get too excited. I did one oil painting as a teenager, from a kit gifted to me by my great grandma. I think it was something sitting around she decided she wasn’t going to use. No, it was not paint by number. The finished product is in a box somewhere in my storage unit. A still life involving fruit, including a pomegranate … and at that point in my life I’m pretty sure I had never laid eyes on a real life pomegranate.

And of course you already knew I like Sudoku.

As I ventured into Hobby Lobby, I felt like I was taking a fashion risk with my attire that day. I texted a pic to a few friends asking for the over/under on obnoxious stares and questions. I have a talent for attracting attention without really trying, so this is nothing new but we might as well make it fun.

Oh she must be an artist …

Sometimes my detailed nerd skills are best used when paired with someone on the artist end of the spectrum. I often hesitate to unleash the details and the numbers on friends whose feet are firmly planted in the “creative type” camp, because I know I’m going to BLIND THEM WITH SCIENCE. But I do it anyway if we’re working on a project where it matters. It’s why I’m there. Spreadsheets and databases and math? Do not be alarmed. I’ve got it under control.

I was working on a project the other day. Well it wasn’t really much work. When I’m in full on database mode, I’m going to shut the door and not come out for maybe several hours. But when throwing something together slightly less data-y, mostly it’s just the wheels turning in my mind as I go about my day. A text here and there. A google search or two.

We got to the “pray and think about it for a few days” point. (Yes. Thank you.) All the details in the world aren’t The Thing for deciding this one. Text conversations that veer off into left field to the point I’m not completely sure whether we’re conversing or writing a song … well they may not be The Thing either. But they’re amusing at least.

Details, details, schmetails. Deliberate time in the creative space, reading, and one night this week of sleeping ... like ... Rip ... Van ... Winkle (finally) are helping me rest up from a little too much detail. Or too much of the wrong kind of detail.

“Just because you can do it, doesn’t mean you should do it.”

For more Details see Sue Bowles at bebold7.wordpress.com and Leisa Herren at life4inga.blogspot.com.