Sometimes minutiae distract us from telling the story. Sometimes the story is in the minutiae.

Sometimes I forget to put the second “i" in minutiae.

I finally got around to my annual jigsaw puzzle extravaganza a couple weeks ago. It’s a nice way to focus, get away from screens, and get my brain moving. Here’s a small sampling.

Puzzles can be obsessive and addictive for me, though, so I cut it off before too long.

I noticed something this time around. Jigsaw puzzles are a metaphor for life.

You have a picture of what it’s supposed to look like in the end. We just started a study of Revelation at church. (Spoiler alert: The good guys win.) It might be a weird, intimidating, and maybe even difficult to interpret account, but we have an idea of how things turn out.

You know that good habits like sorting the border pieces first will help make your journey easier.

And then, and then …

Maybe you have a bazillion solid red pieces that all look the same. What are you supposed to do with that?

Maybe you have some easier spots like a McDonald’s-colored Mardi Gras float that really stands out.

Maybe you can’t see what’s ahead. You go through piece after piece looking for direction. I mean, you know how it’s supposed to look. This should be easy, right? And then, in one bright shining moment, you find that one magical piece that has just enough of a hint of your next adventure. Just enough to suddenly open your eyes to progress and the primrose path forward. You had the pieces all along. You just couldn’t see how they fit together.

So onward you go.

And then there are the glitches in life. We know there will be big glitches. But what about all the little, seemingly meaningless glitches. The ones that distract us from making forward progress. The ones that aren’t even big enough for us to feel we have a right to be aggravated. Does a giant pile of little annoyances equate to one big one somehow? I don’t know.

I switched health insurance the first of the year. There should be better benefits and more of my doctors in-network with the new company. I have to select a primary care physician and get referrals for specialists. Haven’t had to do that in a long time, but it shouldn’t be a big deal, right?

Step 1. In late December select my primary care physician online before I can pay my bill. Great except my doc doesn’t show up on the list. But he shows up as in-network on the other web site. Grrrr. Call and get put on hold while they manually set it. They assure me he is actually in-network. Cool except for the part where the call is dropped and they don’t get back to me even though – and this seemed odd, but whatever – the representative asked if there was a phone number they should call back if for some reason our call was interrupted.

Step 2. Just wait for the paper bill that should arrive in a couple more days. Great except that it takes a full two weeks from the time they emailed and said one week.

Step 3. Skip the primary care physician selection because my doc still isn’t on the list. Pay bill online. Call. They say it’ll take 48 to 72 hours for the payment to show, and then I can go to the other web site and select a doc myself.

Step 4. Check daily until I’m able to register on “the other web site” and select my primary care physician. Because I skipped that step in order to get to the payment screen, they have already selected some doc I’ve never heard of, and the web site tries to tell me the new selection will be effective February 1.

Step 5. Check daily until I’m able to print an insurance card (with the correct doc’s name on it already, interestingly). Because every step on the web site takes 48 to 72 hours, and everything involving snail mail takes two weeks.

Step 6. Try not to have a cow. Have I mentioned I’ve been on allergy shots for five years this time around, and I was due for the last set two weeks ago? At least it’s not spring pollen season yet.

Step 7. Call primary care physician to request the referral. Run a copy of the insurance card printout by their office. Call two days later. Get told they’re working on it, it takes some time.

Step 9. Check the web site daily since referrals are supposed to show up online. I am absolutely convinced it will take 48 to 72 hours.

Step 10. Two days and a weekend later, call the doctor’s office to check on progress. Talk to a very confused receptionist who apparently calls my allergist to book a follow-up appointment. Return voice mail from the receptionist, but the nurse working on the referral picks up. She explains the confusion and says she just that day has been granted access by their billing company to some computer system she needs to use. Hear back from the awesome nurse in a couple hours. The referral is done. It’s done!!! She has a reference number for me and is faxing a copy to the allergist.

Step 11. Look for referral online the next morning. It’s still not there. Ha! Call allergist to confirm they have it. And. Finally. Get my shots!

Somewhere in the midst of this keystone cops exercise, my laptop charger started to go on the fritz. I ordered a new one from Amazon, choosing a different supplier than in the past because I’m not happy with the reliability. We don’t have Prime at the moment, so I went with the longer-version free shipping.

Shouldn’t be a big deal, right? The problem is intermittent. I’ve been able to manipulate the cord a little and get it to work every time so far.

And then it died.

Online tracking said the new one wouldn’t arrive for another week.

I tried Walmart because according to their web site I should be able to find something in the $25 range. Except everything was in the $55 range at the store. And the doctor’s office was calling me back. And I was pulling out my phone to check the Walmart web site again. But the big hulking DirectTV rep trolling the electronics department was trying the not so subtle sales technique of helping the little lady with her technology problem. (Ugh. Go away. I’ve been automating manufacturing plants for years. I think I can handle a laptop charger.) In real life I was polite. And I let him convince me to buy just the cord part I needed for $20. Which so absolutely didn’t fit when I got home.

I used my phone to order a charger to be delivered “site to store” at Walmart the same day. For twenty-five-ish bucks, thank you very much. It should have been pulled by 10pm. I waited for the email, and waited, and waited. Okay, fine, I’ll have to pick it up in the morning.

In the meantime, my sister offered up her rarely-used-these-days laptop. Very generous and thoughtful. I did accomplish a couple things. But mostly I spent all evening installing update after update after update. Did I mention there were a few software updates to catch up on? That thing should be running smooth as steel at this point.

The next morning, after taking care of my long awaited allergy shots, I proceeded to Walmart. Returned the tab-A-doesn’t-fit-slot-B cord at customer service. Picked up the shiny new charger. Browsed a few things I didn’t have time for the day before. Went home.

It was a cold but bright sunny day here in central Ohio. I dropped my bags inside and then walked out the driveway to pick up the mail. There was this little package from California. Addressed to me. Yes, the charger I ordered from Amazon. Several days early. So I dumped the mail inside and went back out to take pictures of deer tracks. Because really what else are you going to do? 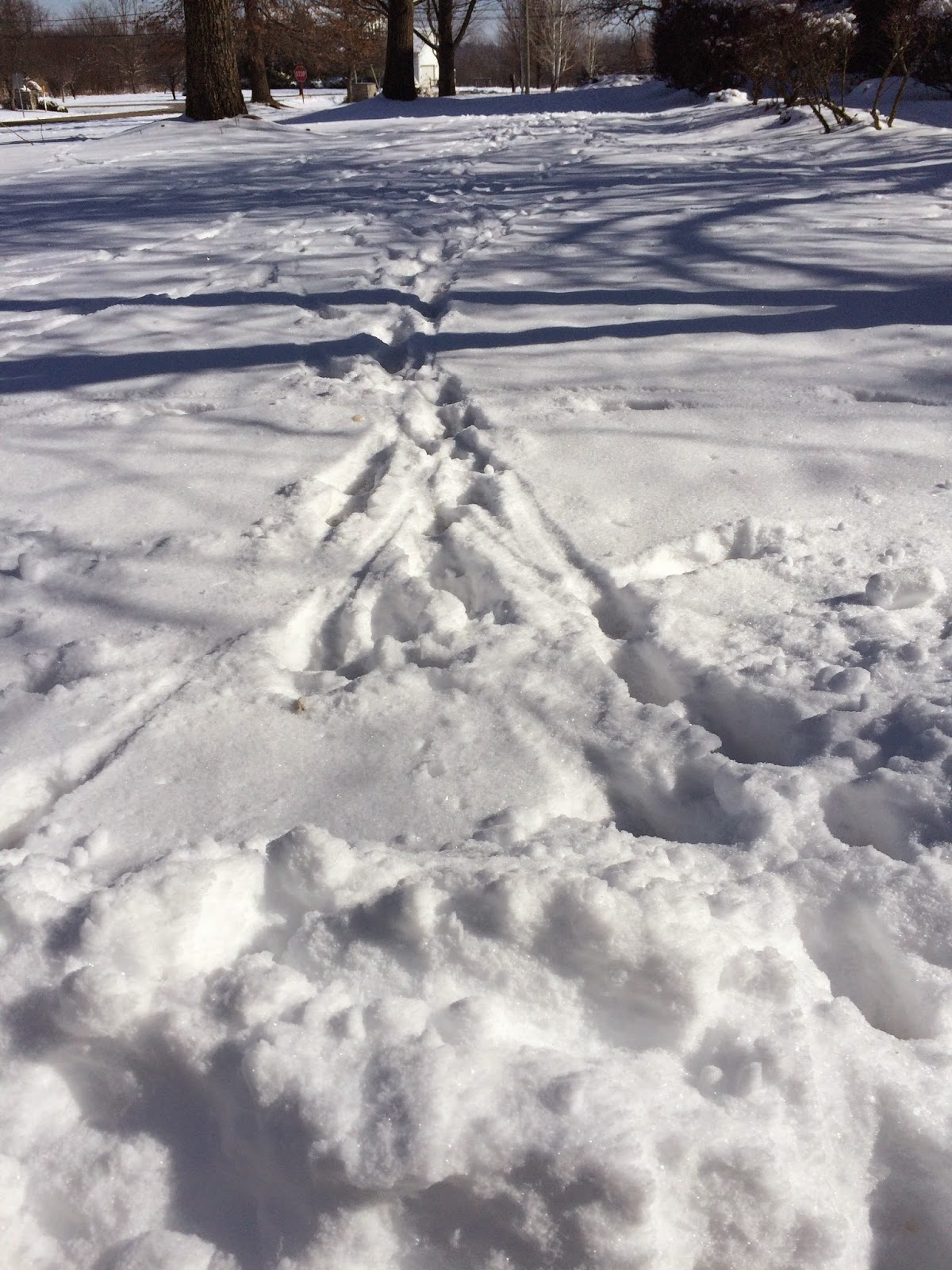 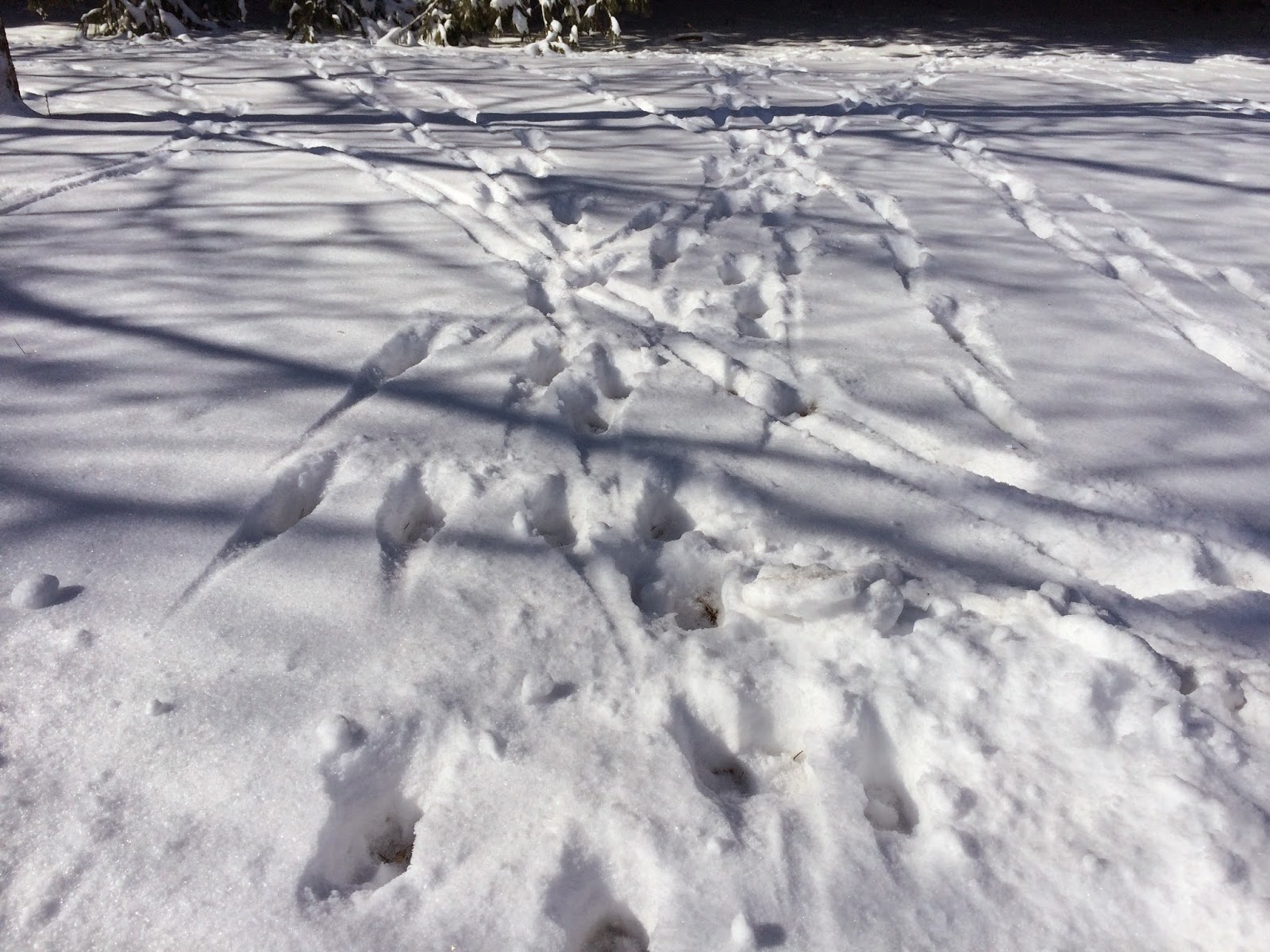 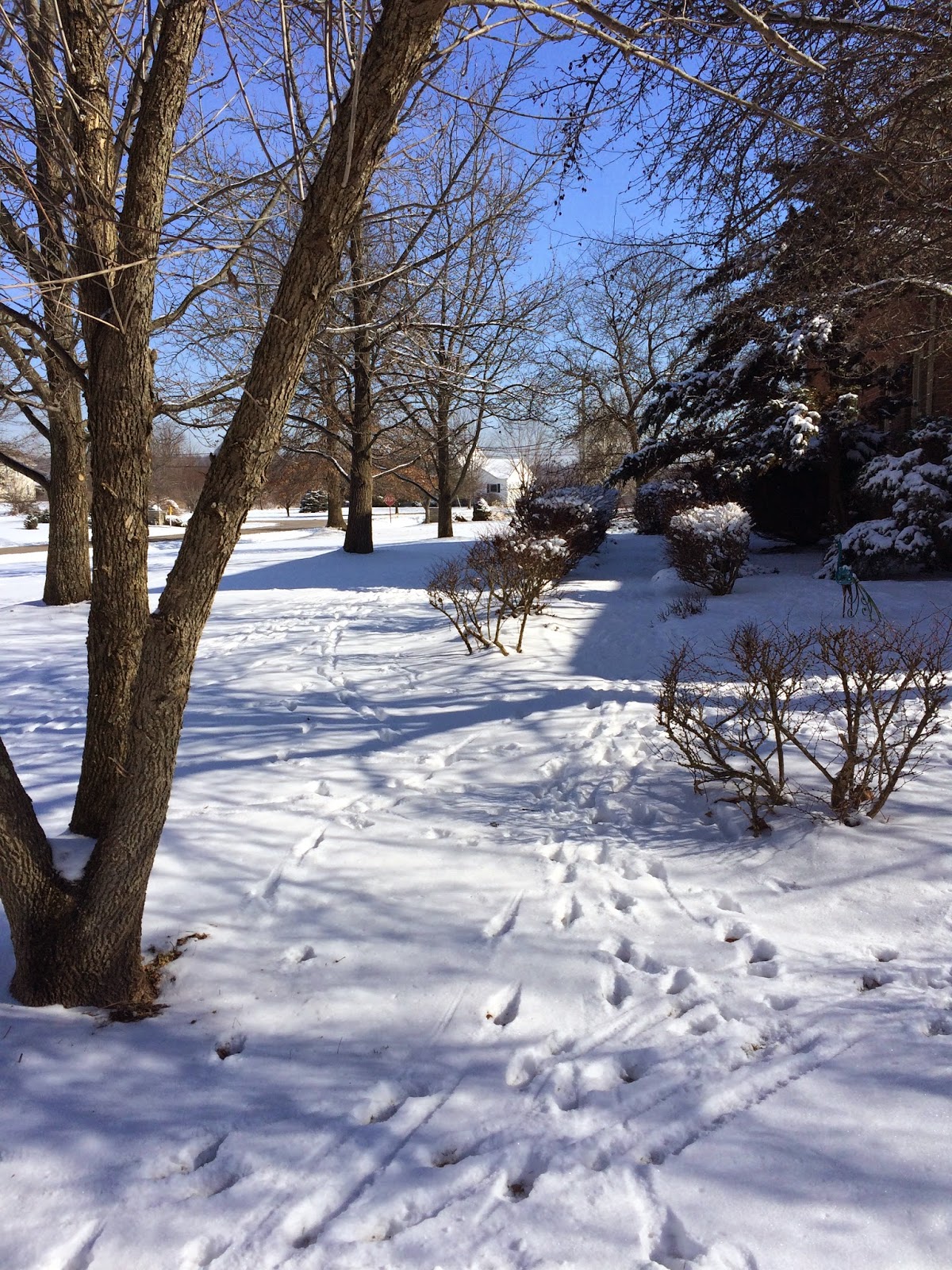