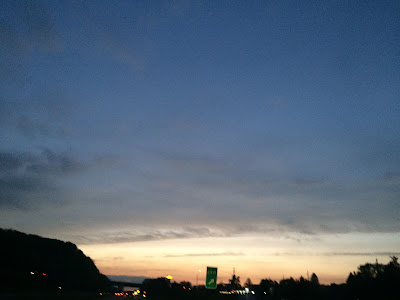 Eugene Peterson hits it out of the park again. Well, Eugene Peterson and the Apostle Paul. As I am prone to do, I flipped over to the Message version of the passage being discussed amongst ourselves at each table last night.

“But sin didn’t, and doesn’t, have a chance in competition with the aggressive forgiveness we call grace. When it’s sin versus grace, grace wins hands down. All sin can do is threaten us with death, and that’s the end of it. Grace, because God is putting everything together again through the Messiah, invites us into life—a life that goes on and on and on, world without end.” ~ Romans 5:20-21 MSG

Some purists raise their eyebrows (or have a spazz attack) over the Message translation, reminding us all that it’s a paraphrase, not a literal translation of the original text. Okay, so it was translated phrase by phrase, passage by passage. That doesn’t turn the whole shebang into some gnostic gospel.

Here’s the deal. I was raised on King James in a small-to-medium size country church, transitioning into New International Version in my later teen years. The church’s graduation gift to all the high school seniors was a parallel KJV-NIV bible. I wore the spine out of that thing.

Today with apps on our phones we can flip at will between the five hundred kazillion English translations. And lots of non-English. I can flip over to the Toma bible friends have been working on for decades. Which I did of course, except Romans doesn’t exist yet in written form per my app, so I chose a different book just for kicks. I don’t have a clue. I doubt I’ll ever learn Toma, but you never know.

In the bible translation world and in the sphere of world missions, we talk about unreached people needing a bible translation in their “heart language”. Heart language. So maybe there’s a national standardized language, the language of commerce and higher education. In a lot of places you might not expect, that might even be English, just from colonial and/or global economy influences. But there might be many local dialects much more comfortably spoken and understood by those who grew up with them.

How are people supposed to have a fighting chance at hearing and responding to the gospel if it doesn’t exist in a form they can understand? I don’t have the stats handy, but they’re out there on how many languages have no written or even oral translation of the bible. There are many. Cell phones and sim cards have done great things for oral translations. If your tribe speaks a language that doesn’t even have a written form (oh it’s a thing), not having to create that written form and then establish a literacy program can shave years off the translation process.

So back to the Message. All translations have their issues. Ask me sometime about my favorite pet peeve in the KJV versus NIV. If you prefer the Queen’s English, have at it. NIV was a vast improvement in many ways. Much more understandable for the everyman. I feel like the Message gets at our heart language, though. That was Eugene Peterson’s intent – to make the language and the idioms and such more meaningful in today’s English.

Imagine if the Apostle Paul got off a plane at LAX. Do you think maybe he’d profess the gospel while speaking fluent Valley Girl?

All things to all people. While preserving the truth.

You can say the words, but are they meaningful to the audience?

We talk about grace, but I wonder if we really get it.

Or if the word “grace” is code for “Religious nut speaking. Please ignore.”

Willingly suffering a gruesome death on a cross so you don’t have to.

So you can be forgiven.

For anything and everything.