Did you watch Tyler Perry’s “The Passion Live” on Fox the other night?

You can stream it here.

I almost didn’t watch it. I’m glad I did.

Tyler Perry did a unique and creative take on the last days of Christ. He weaved modern, secular songs into the story with modern looking characters in a modern locale. New Orleans. Perry’s hometown but also a city still recovering from Hurricane Katrina ten years later. NOLA has always been a city of contrasts … sinners and saints … Christianity and hedonism and voodoo … Bourbon Street partying and Sunday gospel brunch … Jesus songs being sung by street performers a few feet away from drug deals.

Most of you know I was in New Orleans last August to help with the “Brennan” movie shoot. I lived just outside the city a couple times in the nineties but hadn’t been back in a million years. What a fun, crazy experience. My adopted brother, writer / director David Leo Schultz was interviewed recently about making the movie. You can catch him on Chris Marchand’s podcast here. (Mildly PG13.)

So the draw of seeing familiar haunts was strong. The Passion Live had built an impressive stage along the river at Woldenburg Park. Not being a native or a purist I think of that area as all Riverwalk Park.

Last August my partner in crime, Shelley, and I had a couple hours of downtime one afternoon. What you’ve heard about making movies --- that it’s often hurry up and wait – is true. We didn’t really want to eat, or drive back to our hotel, or shop endlessly. We just wanted to chill. So I kicked my rusty memory into gear and dead reckoned my way to the river. It’s not difficult if you know to head to the corner of that one parking lot and cross the streetcar tracks. 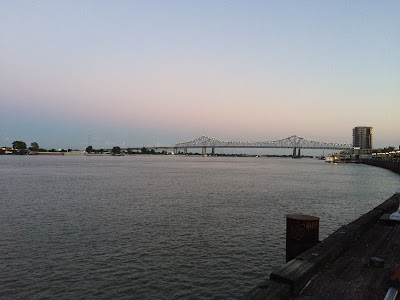 The Passion Live stage was right in front of The Natchez. There were people everywhere, including on the riverboat. I was a little sketchy on what qualified as Woldenberg Park, but when I saw the live shot … I was in that exact spot a few months ago!

There were live shots from around the city, broadcast to the audience on a giant screen in the middle of the stage. I’ve mostly avoided others’ opinions from the interwebs this week, but I did see one criticism to the effect of “I turned it off when they opened with Jesus on the subway”. Streetcar, friend, streetcar. There ain’t no such thing as a subway below the city that’s already below sea level.

So if you’re not cool with a little artistic license … if you prefer that old time religion and don’t also appreciate Jesus closing with a Katy Perry song … or Jesus’ words to the thieves on the cross being a little out of order chronologically … you might want to steer clear of this one. I didn’t see anything blasphemous, but I was dressed down by a Pharisee the other day so I’m starting to question my discernment.

(Well not any more than usual. I laughed and filed that message for future amusement.)

Jesus singing a quiet version of Creed’s “Arms Wide Open” to the disciples, foreshadowing the crucifixion itself. I love, love, loved the portrayal of Jesus. You could see the emotion in his face. You could feel the emotion. How many times do we sugarcoat in our minds the events leading up to the cross. We know the story. We know Jesus loves us. We know he sweat blood in the garden. Seeing the love and seeing the anguish in a modern context … it was well done.

I don’t know that it was a favorite part, I’m still trying to decide, but the illuminated cross being carried through the city from the Superdome to the park was interesting. It did give more of a live, “things are happening” feel to the whole production. Carrying it down Bourbon Street and through Jackson Square in front of the cathedral at night … that was seriously cool.

Judas and Jesus when the betrayer brings the popo in a complete overkill of riot gear. That’s the equivalent of how it originally went down. Hats off to Chris Daughtry and Jencarlos Canela. Wow, wow, wow. While singing Imagine Dragons’ “Demons” you could see both the humanness and callousness of Judas. Jesus’ love for Judas and the depth of his hurt over being betrayed were evident. These two brought so much emotion to an event we often gloss over on our Holy Week checklist. Last supper, check. Judas does his thing, check. Time to head to trial, check.

Speaking of that trial. Although I can’t say I was thrilled with Seal’s acting in this case, his aesthetic was impressive. And I’ve always loved Tears for Fears’ “Mad World”. The choir singing “We Don’t Need Another Hero” was startling.

My view of Pilate and the trial scene may have been a little skewed by something said in the sermon earlier that day.

“Pilate tried to avoid the cross.”

How hard he tried is up for debate but remember how many times he asked and questioned the Jewish leaders and the crowd? Really? What did he do that’s so bad? Really? Barabbas? Are you sure?

Kind of makes you wonder about Pilate’s ultimate fate given what he witnessed. I don’t think scripture mentions him other than in the context of events surrounding the crucifixion. I shall have to research further and see if there are any historical texts. I’ll get right on that in all my spare time. If anyone knows something, please enlighten me.

The actual crucifixion was not depicted, which I think is totally fine. Tyler Perry as narrator described it in enough detail. Mel Gibson’s “The Passion” filled the need to understand the goriness.

Jesus appearing at the end was a great visual. Honestly, someone had to tell me it was a Katy Perry song.

I re-watched a few of my favorite scenes today. If you haven’t watched The Passion Live, I encourage you to go take a look.

For more thoughts on The Passion Live from my writing partners, see Sue Bowles at bebold7.wordpress.com and Leisa Herren at life4inga.blogspot.com.

Your eyes, they shine so bright
I wanna save that light
I can't escape this now
Unless you show me how