A body at rest tends to stay at rest …

Well technically that’s inertia, not momentum. But it’s all related.

Oh boy, we could really go down the rabbit hole of Newton’s laws of motion and thermodynamics. So many laws. And I’ve spent soooooo much time studying them. You don’t earn a graduate degree in chemical engineering without some hardcore time spent with physics and chemistry and good ol’ Mr. Newton.

The degree? Yeah, I’ve got one of those.

Professor Harry Hershey used to pay me cash to grade undergraduate thermo assignments. My love of entropy goes way back. So humor me on the science for a minute.

How big times how fast.

A loaded semi-trailer at a hundred miles per hour has beaucoup de momentum.

And now that I’ve gone all Isaac Newton on y’all …I’ve been feeling a decided lack of momentum for a while. I like momentum. Moving is good. Sedentary is bad.

At my fall retreat two months ago there were a couple of exercises to choose from on Saturday night. Do either, neither, one. It was a lovely, quiet, peaceful atmosphere, with the lights down and candles lit. Our worship leader played guitar and sang, and others joined in the singing.

There were tables off to the side for the two exercises. I chose the rock one. For those of you thinking, “Well yeah, she’s a little bit rock and roll,” yes I am, but I mean an actual rock. The directions were to select a rock (most were about the size of a fist), grab a Sharpie (I chose pink), and write words on the rock that represent things holding you back and/or the dead places in your heart (the subject of an earlier teaching). You were then to go outside and throw the rock as far as you could into the woods. There would be a staff member to point us to the designated spot since it was after dark. The idea was to symbolically leave the bad stuff somewhere in the woods in nowhere Ohio.

An alternate plan was floated … take the rock with you, hang on to it for as long as you like, leave it somewhere meaningful to you, and feel free to share it in the private Facebook group for retreat participants. I guess I’m being a little more public with mine.

As I sat quietly that night, back at my seat, I prayed and contemplated where my rock should go. The dark woods in nowhere southern Ohio didn’t seem right. I’m sure I’ve left plenty enough in nowhere southern Ohio in the past. I thought about the Great Serpent Mound. I visited there the day before the retreat started, and it was lovely and peaceful with an overlook that would do. It still didn’t feel quite right.

This idea stuck. I don’t know, I don’t pretend to understand how the Holy Spirit or even my own mind works. But it stuck.

Johnson’s Creek is in, well, nowhere Tennessee. Near Nashville. Around the corner from where Christian musician Rich Mullins lived. “Down at Johnson’s Creek the trees grow tall …” made it into one of his lyrics. A friend took me there a few months ago. It was after dark but still peaceful and beautiful. It would be nice to experience it during daylight hours. Nice. And therapeutic.

I shared my thoughts with my friendly neighborhood Tennessean. And we had a plan. Oh how we love plans. The planning, the plan, carrying out the plan. We. Are. Planners.

But then … life happened. Grrrrrrr! Ack! @!#$&!!! Life! I’ll spare you the gory details, but just know that life exploded and things did not go according to the plan. It was all good stuff going on, but the plan stalled. It went on hold.

Fast forward (well maybe not all that fast depending on your perspective) to the last couple of weeks when I’ve been contemplating my velocity or lack thereof. Honestly I’d like my mass to decrease, but that’s a separate New Year’s weight loss season discussion.

Momentum. Am I just wallowing in impatience in wanting to make this happen on my own? Discerning God’s will versus my own is always a challenge. And I am a strong woman who knows how to get things done, so it’s an even bigger challenge.

After studying hotel deal options and weather patterns (thank you, El Nino, you’ve been good to me this winter) … I packed a bag Monday night and Tuesday I hit the road. Destination nowhere Tennessee.

I still doubted whether I was doing the right thing. It was cold – 12 deg F when I left – but a gorgeous, mostly clear day. It’s a six to seven hour drive, so lots of time to contemplate the sky and life. To an extent I’m sure we all see what we want in life. Are what we think are signs from heaven really signs from heaven? Timing is everything. What might be a pretty picture at one point holds great meaning at another.

I’m pretty sure God is aware of my doubtful, discerning, sciency nature. So sometimes he likes to smack me in the face repeatedly with particular signs. Or send the Holy Spirit to chatter at me like one of those dolls where you pull the string and get the same set of messages over and over.

I can’t tell you how many times I saw a cross in the sky.

A cross. Much like my little Israelite cloud led the way to New Orleans last August, there was a cross to the left, sometimes to the right, sometimes in the middle. There were only a few times when I could safely snap a pic, but you get the idea. I kept expecting it to go away. There were different crosses, different places, but never out of view for long. As I approached Nashville I seriously expected not to find any crosses in the sky. But no, over toward my destination, boom.

Of course, okay, fine. Thanks for the beautiful day, by the way.

Once off the interstate, headed in a different direction, at one point I looked up and was so startled by the cross in front of me … I uttered holy, um, cow … I’m sure I said cow!

I found my destination with no incident. It’s a little obscure, especially when the only prior visit was at night with someone else driving. No worries, I had studied Google earth and have some degree of directional aptitude.

What a spectacularly gorgeous day it was. 42 deg F and a bit windy by then. A couple of fishermen were trying their luck to no avail. The one asked me if I came there a lot and had seen the water moving so quickly before. Like me, he had only been there once prior. Apparently things were too muddy for fish to see the bait. Upstream flooding we theorized. He and his buddy left before long.

I took my time snapping pics, writing in my journal, and contemplating the peace and beauty. Yes, there was a cross cloud. And one of those rainbowy clouds as a bonus.

Okay, got it. Thanks.

After a while I took my rock, wrapped up in an washcloth, out of my purse … wrote some more words on it … in pink Sharpie, of course … snapped some more pics … walked out onto the dock … and hurled that baby and its stuff as far as I could. 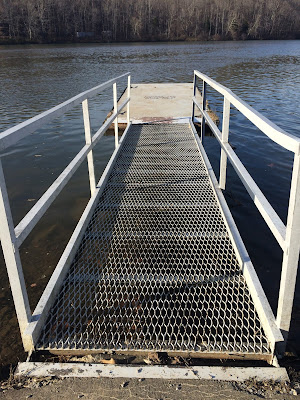 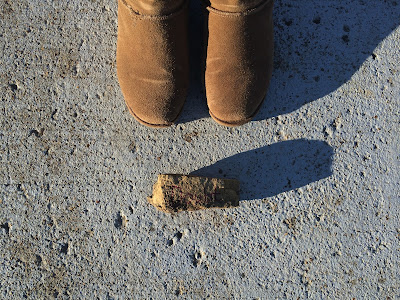 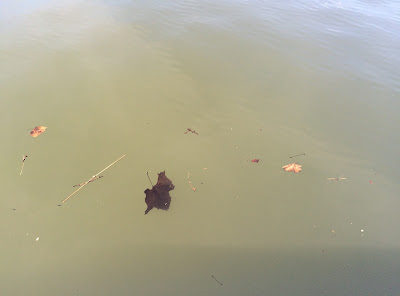 When I was ready to leave, Mitch McVicker’s “Come Back to Your Heart” was playing in the car. “You’ve been promised a stone with a new name …”

For more on the subject of “Momentum” from my writing partners, see Sue Bowles at bebold7.wordpress.com and Leisa Herren at life4inga.blogspot.com.

~ Rich Mullins' "With the Wonder"