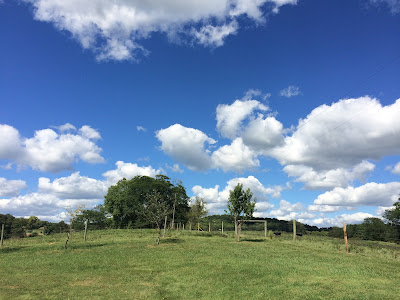 What moments do you consider pivotal? Significant?

Births? Deaths? Marriages? Moves? Job changes? In less than a week there have been three deaths, one wedding, and one birth all within my church family. Some expected. Some expected not quite yet.

People have been breaking out into Elton John’s “Circle of Life” from The Lion King.

What, you don’t break out into song in the course of your daily life??? Get with the program. Listen to some show tunes.

Some moments aren’t so obviously pivotal until you’ve traveled down the road a piece.

Like that time I was having a bad day and asked for one of the severance packages being handed out. My wish wasn’t granted for another year “because I was too awesome”. Okay, thanks?

Good things happened, though. Over lunch with my former coworkers a year or two later I was asked if – like everyone else who had moved on – leaving was the best decision I ever made.

Yeah, it was. But I had no idea what I was doing at the time.


That’s fairly typical of some of my more pivotal moments … I had no idea what I was doing at the time. Modern conventional thinking says you shouldn’t admit that you have no idea what you’re doing.

Almost three years ago I went to see a movie I’d been talking up to all my friends. About a musician I liked. You wouldn’t think going to see a movie was pivotal. A fun MLK day excursion for entertainment with sister and a friend, lunch with the boy, and cream puffs in German Village. No big deal. Come to think of it, one of the gentlemen from the church hosting the screening introduced himself and asked what church we were from. “Oh, I was just there,” he said. That would be for a funeral. I was there, too.

But God. He was just getting started.

A few months later the movie peeps announced retreats they were holding that fall. I signed up and I showed up. I could use a vacay. A retreat. A respite. The mountains of Pennsylvania sound lovely in October.

Fast forward a few months. I somehow turned into a Mitch McVicker groupie. I met Mitch at the fall retreat. 2015 included a concert (the same day as a wedding, maybe not so coincidentally) … a concert hosted by my church … and a concert requiring a road trip back to sacred ground in Pennsylvania.

And I somehow turned into a production assistant, promoter / booking agent, occasional public speaker, and whatever miscellaneous roles are required at a film company. Now a nonprofit film company. A nonprofit film company that, as I like to tell those who would receive the message well, “thus far makes PG13 Christian movies”. That got attention over dinner the other night.


Okay, I’m predicting the next movie will be PG. And we’re about more than just the feature films, although the ministry kind of grew out of the feature films. (But God.) You can read more about the mission here.

Many more months down the road … my head is spinning a bit. I’m prepping for another Mitch concert. (I need roadies! Get with me.) I’m prepping for Ragamuffin Camp, which may involve a little more than just packing my bag. And I’m brainstorming, praying, and researching nonprofit fundraising and development, biblical models of those, and yeah, I’m learning. Totally by the grace of God I’ve networked into some great resources.

Oh! And that movie I helped make – Brennan – just came out on DVD!

Nothing much going on here.

I’m sure more pivotal moments are right around the corner. Maybe I won’t be so surprised by them this time.

All that you're working for
Could blind you to
The treasures all around you
So don't miss these
Moments, please
The joy before
The crown you seek